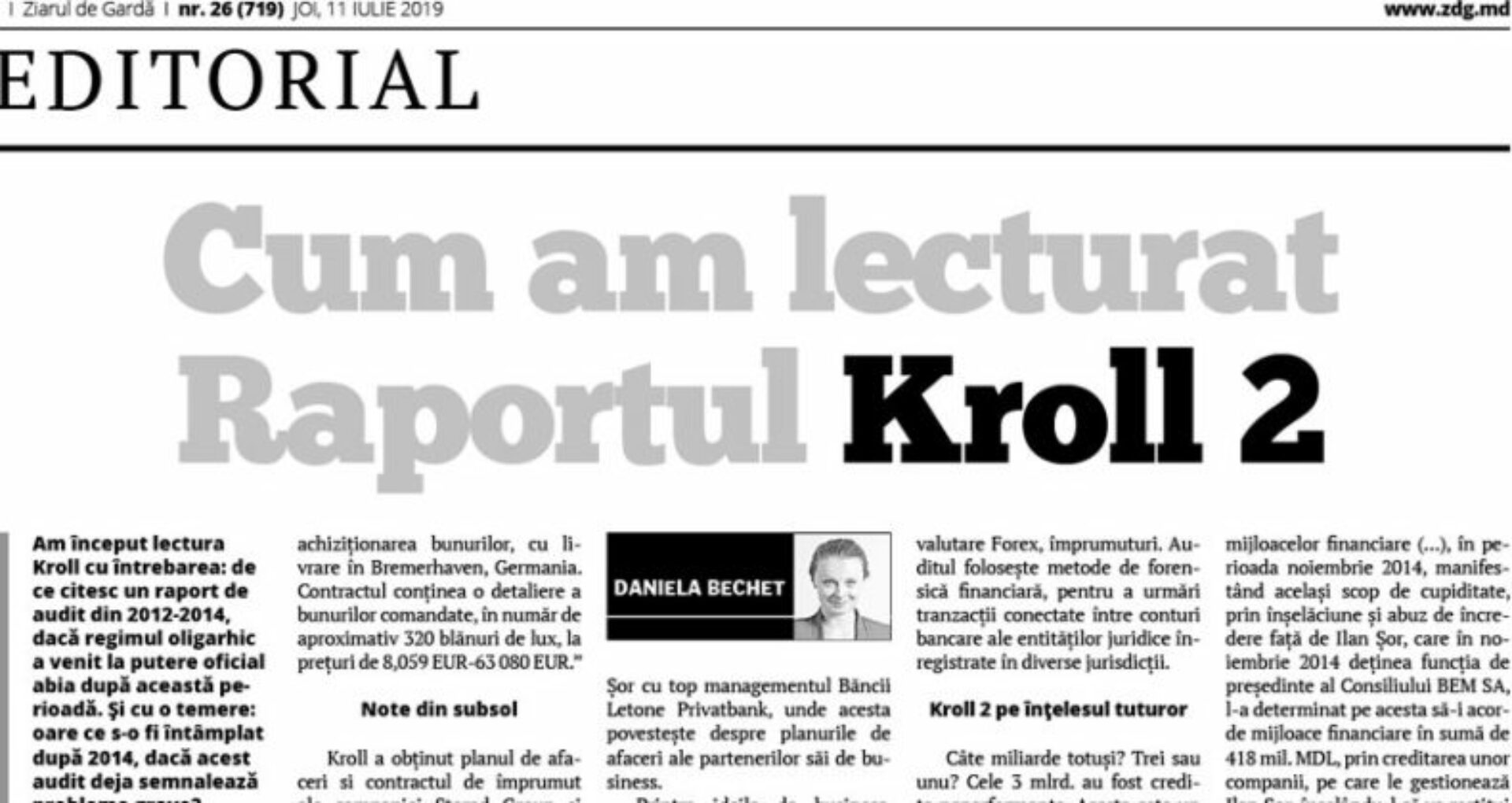 I started reading Kroll with one question: why am I reading an old audit report from 2012-2014, if the oligarchic regime officially came to power just after this time period? And whatever happened after 2014, if this audit report gave serious warnings back then?

Government bailouts through emergency credits to an economic sector are common around the world. The United States, through its Federal Reserve, did this after the 2007 economic crisis – providing one of the biggest bailouts in history. However, this practice is even older than that, dating back to the Great Depression in the 1930s. A simple search shows the many government bailouts since 2008, such as the automotive sector in the U.S., the energy sector in Turkey, the banking sector in Europe and the U.K., and most recently, China.

Government help kept coming and was justified by saying that the bankruptcy of large corporations in key sectors poses a threat to the national economy. This resulted in practices of government meddling in the free market, through the infusion of cash, stricter regulations, and even asset take over in the form nationalizations. On the other hand, government bailouts can lead to popular discontent and even change electoral preferences, as citizens seek to hold someone responsible for how taxpayers’ money is spent.

How many billion were stolen, in the end? One or three? The Kroll-2 report claims that nearly $3 billion was taken out through non-performing loans, a serious accusation even without adding charges of money laundering and bank fraud. But when we talk about a fraud or bank theft, one not only needs a fake loan request, but also a banking insider as an accomplice to approve the loan and a subsequent company bankruptcy. This is one way to hide a theft. And the report shows at length how the Shor Group and their representatives have taken over management at three different banks, making this kind of bank fraud possible through the complicity between banks and companies requesting credits.

But not all $3 billion were loans to bankrupt companies. Actually, the report shows the circulation of this money through money laundering schemes throughout 2012-2014. Some of the Shor Group companies are real businesses, and they are also listed in the Kroll report, next to companies that contracted non-performing loans. Questions then arise about the current situation of the Shor Group companies, which have gone on with their activities, including changes of ownership. These questions should be posed by fiscal and customs authorities, whose oversight should confirm or disprove whether the activities reported were real or fictitious.

Another way to understand the extent of the bank fraud is to look at the bailout composed of two emergency credits of MDL US $870 million to the three banks, taken from the National Bank reserves as approved by former Prime Ministers Leanca and Gaburici.

Pages omitted from the public release

Usually, when opening bank accounts, companies need supporting documents such as business plans and powerpoint presentations. The Kroll report indicates that some accounts were clearly opened for the purpose of money laundering. They requested and analyzed the bank account opening documentation and determined that these accounts are connected to the Shor Group and to money laundering activities.

To this point, Kroll offers segments of an informational memo from Shor’s meeting with top management at Latvian Bank Privatbank, where he talks about his and his partners’ business plans.

Among the business ideas mentioned in the memo were: the retailing of shoes, clothing, and accessories brought from Europe and China and sold in Moldova and the region; equipping a data center in Kyrgyzstan, and construction projects in Moldova, Russia and Ukraine.

Although the companies holding accounts in Latvian Banks were registered in the United Kingdom, their commercial addresses indicated in the bank accounts’ opening documentation was often in Moscow and Russia. Moreover, almost all beneficiaries and representatives of the companies were Russian citizens, and a smaller group of beneficiaries included Ukrainian citizens.

Even though the auditors have obtained much information regarding the activities carried out by the Shor Group companies, they do not know if these goods and services were ever procured or delivered; they only possess the information written in the contracts, pro forma contracts, business plans and other loan documentation. Tons of cement, hundreds of bookshelves and furniture articles were to be procured from the loan proceeds subjected to the audit. By and large, these business plans disappeared in a suspect fire in november 2014. But Kroll offers pages that Moldovan legal authorities previously thought to be disappeared.

The Supreme Court Decision on Platon

We cannot say today whether there is any possibility of finding the “stolen billion.” Under the previous Democratic Party government, it was almost certainly impossible, although prosecution cases and lawsuits, verdicts and sequesters were started in an attempt to recuperate the stolen funds. Although Kroll points towards Shor, the Moldovan authorities pointed the finger in the opposite direction – towards Shor’s business rival, Nicolae Platon. Comparing the 154-page Kroll Report against the 144-page Supreme Court Decision on the Platon money laundering case, makes for a new reading.

In cases of fraud and dilapidation of the state, international law practice often starts a case with: “The State against citizen X.” In Moldova, the verdict of the biggest money laundering and fraud case starts with the phrase: “Platon manifested deception and avarice towards Shor.” After the government bailout for the recapitalization of the banks in 2014-2015, the feuds between individuals are insignificant compared to the avarice of these individuals towards public goods and the state. So when we think about how many billion worth of non-performing loans there are, let’s not forget the privatizations, concessions, and non-performing procurements. In this context, the Kroll Report is just a timid start to an investigation.

Could the beneficiaries of the stolen billion be identified? Could these funds be recuperated after many years have passed? Could assets be sequestered and auctioned off? Who are the final beneficiaries, and what is their connection to the Russian and Ukrainian citizens whose off-shore bank accounts received the transfers Kroll identified?

If we put together the 144 pages written by the Supreme Court and the 154 pages of the Kroll Report, staying clear from the noise created by endless schemes for money laundering, we could obtain a shorter list of only 6 companies from the Republic of Moldova: Caritas, Provolirom, Voximar, Dracard, Contrade, Danmira. These are the firms that $1.8 billion of loans from Banca de Economii (BEM) and Banca Sociala (BS)  in November 2014.

The much awaited list of foreign beneficiaries with off-shore accounts, who received the funds 5 years ago, will not offer a quick fix to the bank fraud given that they are in foreign jurisdictions. All the while Moldovan authorities with oversight and control functions have not yet intervened in the home jurisdiction.

For example, Kroll obtained the business plans and loan documentation of the Storad Group and the sales contracts between Storad and Formisold. The business plan was written on a letter head of Molint Group, another company from the Shor Group, involved in the fraud. According to the business plan, Storad planned to trade shoes and construction materials. In 2014, Unibank gave Storad loans of $17 million , €4,1 million and MDL 369 million. In rapid succession, Storad Group’s funds were transferred through four accounts at a Latvian Bank, and a portion was transferred to another connected company, Dufremol.

Later, $2.3 million was transferred to companies in the U.K. and Estonia (censored in the report) for “electronic products,” which do not match the original documentation presented at the loan’s issuance. Subsequently, the funds were transferred to China and Turkey for the procurement of “shoes.”

The inconsistencies in the transfer descriptions, the transfer of funds through multiple bank accounts without a clear business rationale and the implausible descriptions of goods to be procured, suggest that the primary goal of activities in the Latvian and Estonian accounts was to “disseminate” the funds from UB without a trace.

As an example, Kroll page 115 details a $5 million loan issued in november 2014  by Unibank to Storad Group, grounded in a contract to buy furs. To be more precise, 320 luxury furs totalling $4.1 million and ranging in price from EUR 8,059 to EUR 63.080. An image of Shor’s entourage dressed in luxury furs in the German town of Bremerhaven comes to mind. 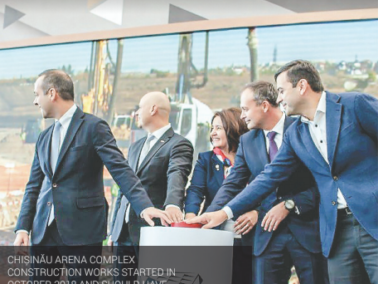