In the last six months, ZdG reporters have talked to dozens of foresters, heads of forestry schools, heads of enterprises, but also with people who work illegally in the forests, being also involved in illegal logging. That’s how we found out how the forest thefts actually happen. We explain in detail the schemes applied by forest thieves.

Read the first three parts of the Forest Thefts investigation:

Theft under the “umbrella” of legal cuts – Surplus method

In order for the theft of wood to be difficult to detect, over time, those involved in this process have implemented and perfected various schemes. The ZdG analysis of the phenomenon of forest thieves shows that a large part of the wood theft takes place during legal, planned logging. For this reason, thefts are difficult to detect by unspecialized people, who do not know the methods by which, under the justification of authorized logging, part of the wood is smuggled out of the woods and sold illegally, and the money – shared by the participants.

The planned cuts are of two types: care cuts (clearing, cleaning, hygiene) and main cuts. In the case of care cuttings, greater interest for wood thieves is the hygiene works, when from large areas, up to 10 ha, sick trees are selectively cut. The main fellings (cleared cuttings), during which all the trees in a certain parquet (forest plot) are exploited, represent a huge potential for those who seek to steal wood material because a large volume of wood accumulates.

According to official procedures, the trees are inventoried before any cutting (care or main). Each tree to be cut is measured in diameter, the species and the height is indicated and, based on a formula, the volume of the wood to be obtained is calculated. An error of +/- 10% is allowed.

“At the given evaluations, the titular forester, the neighboring forester, and the sector foreman, who is responsible for the evaluation, go out directly into the forest. The sector forester is with the ax, the neighboring forester is with the calipers (the instrument for measuring the diameter of the trees), he measures, and the foreman writes in the tree inventory sheet. Each tree is measured in diameter and inventoried. Then the height category is made. After measuring the height category, the diameter category, the wood mass for each plot could be calculated through a formula. Before being exploited, everything is authorized and the volume of the wood mass is already estimated,” Nicolae Manole, forestry engineer at the Enterprise for Forestry Tighina, explained to us.

In some cases, the surplus of wood can reach 80-90% of the total amount.

During the inventory, however, with the complicity of the foreman and the foresters, the estimated volume of the wood mass is underestimated, by writing in the inventory sheet some values lower than the real ones. For example, in the case of trees with a diameter of 20 cm, only 16 cm is indicated. As a result, it is estimated that a much smaller volume of wood than the actual one will be obtained. Theoretically, the inventory made by the foreman and the foresters can be verified later by the forest agency Moldsilva by repeated measurement of the trees.

In practice, however, due to the enormous volume of work that would involve the repeated verification of all surfaces, only about 10% of the surfaces are estimated, employees in the field explained to us. Thus, after cutting, the wood obtained in excess of the initially estimated one is removed from the forest and sold illegally. In some cases, the surplus of wood can reach 80-90% of the total amount.

Former forester: “The surplus can be taken during the day at noon”

“All that is registered in the inventory sheet and sold belongs to the forest district. But when it comes to the surplus, penny by penny, we take it to the boss. The boss decides how many percentages go above, how many remain at the forest district. Of these percentages, somewhere up to 10% is left for us,” explained the former forester Vasile Frunză.

“The surplus can be taken out during the day at noon. At night is suspicious to do it. We make an invoice, the wood is written there and with the given invoice the wood is carried all day. The more you carry, the more you succeed. If the police or the competent bodies check the invoice, they have the right to indicate on the invoice the date, time, and place, so that later the foresters can not steal wood with the same invoice,” said the former forester, who knows from his own experience the methods applied to sell the surplus wood illegally.

Illicit logging and other schemes

In addition to the surplus method, applied in the case of planned felling, the Moldovan forests are thinned every day, year-round, by illegal, unauthorized felling. In this case, the wood thieves dig a hole around the trees and cut them from the ground. Subsequently, the pit is covered with earth and leaves, making it almost impossible to detect deforestation.

This method is usually applied in forested areas where no planned fellings are made, but can also be put into practice around a forest where deforestation takes place, several foresters who participate in such schemes explained it to us on condition of anonymity. Specifically, in addition to the legally exploited trees from a certain parquet, some trees around the parquet are also illegally cut from the ground. In other cases, with the help of tractors, the trees are uprooted. The wood obtained by these methods is then removed from the forest together with the surplus wood, usually also on the basis of an invoice.

By another scheme, in the documents, the wood classified in the logs category is indicated as being of a lower quality than in reality, being transferred to the firewood category. The scheme is a prosperous one, because the price of a cubic meter of logs wood is about 40 euros, where that of firewood is 15 euros. Thus, only from one cubic meter of wood sold, the state is harmed by about 25 euros. Every year, this method sells thousands of cubic meters of wood.

The data provided by the Moldsilva Agency show that, annually, from the state-owned forests, managed by Moldsilva, hundreds of thousands of cubic meters of wood are legally cut and removed from the forests. Such cuts are planned and necessary. Most of the trees are cut as a result of silvicultural works with cleared cuttings, works that are characterized by the complete harvesting of wood and subsequent regeneration of wood for ecological and functional purposes.

Moldsilva Agency and other competent bodies found that in 2019, 3,200 cubic meters of wood were illegally cut, and in n 2020 another 1400 cubic meters. However, the figures do not include illicit stolen wood that could not be discovered. With it, the number of disasters in the forest could be ten times higher.

If we do a simulation with a surplus of only 30%, although in many cases it is even higher, it turns out that in the last two years, in addition to the official amount of cut wood, another 330,000 cubic meters of wood have been removed from forests illegally. At an average price of 25 euros for one cubic meter, it results that wood of at least 8 million euros has been stolen only during the last two years. However, the damage to flora and fauna is invaluable.

However, forest thefts are almost never criminally punished in Moldova. One year ago, in April and May 2020, by order of the Ministry of Agriculture, inspectors from the Inspectorate for Environmental Protection, together with representatives of the Intelligence and Security Service and of the National Anticorruption Center carried out several controls in the forest fund, in order to verify the if the wood received after authorized felling corresponds with the reality in the forest.

The findings analyzed by ZdG show that, in only two cantons, following the inventory of tree stumps extracted in 4 parquets exploited in the first half of 2020, the inspectors found a surplus of 145,961 cubic meters of wood that was not officially accounted for. Iurie Cioara, the director of the Reservation, then expressed his disagreement with the findings. Checks in several cantons of the Pădurea Domnească Nature Reserve showed that, following the legal cuts in 2020, a surplus of 236 cubic meters of wood mass was not recorded.

Two opened cases, one send to the court

What happened next? In a reply received by ZdG in September 2020 from the Ministry of Agriculture it was stated that, following the controls, the forestry foremen were fined 350 euros each. At the same time, the institution informed us that the materials prepared during the verifications were sent to the General Prosecutor’s Office to examine and apply the necessary measures.

In order to find out the fate of these cases, we sent a request to General Prosecutor’s Office. In February 2021, the institution informed us that all documents had been received and examined. The prosecutors started a criminal investigation in four cases and in the other two ended the process. One of the cases was sent to court.

However, public information on the court portal shows that, in recent years, no final sentences have been handed down to imprison forest chiefs for involvement in forest theft.

Foresters, most often sanctioned for violations detected in the forest fund

Those who are punished for thefts from the woods are the foresters, although, most of the time, they are only the executors of the schemes set up by superiors. In 2019, six foresters, two heads of forestry districts, and an administrator of the forestry entity were dismissed after violations were detected in their activity, a district chief being reinstated through the court. In total, 86 foresters, 23 forest foremen, three deputy heads of forest districts, 10 heads of forest districts, and three administrators of forest entities were punished with various sanctions. The information was provided by Moldsilva Agency, following a request from ZdG.

Read the first three parts of the Forest Thieves investigation: 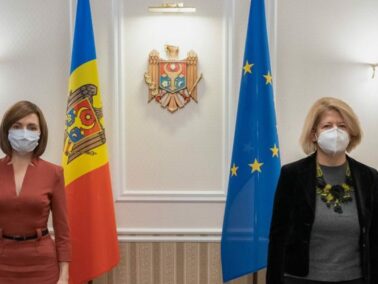