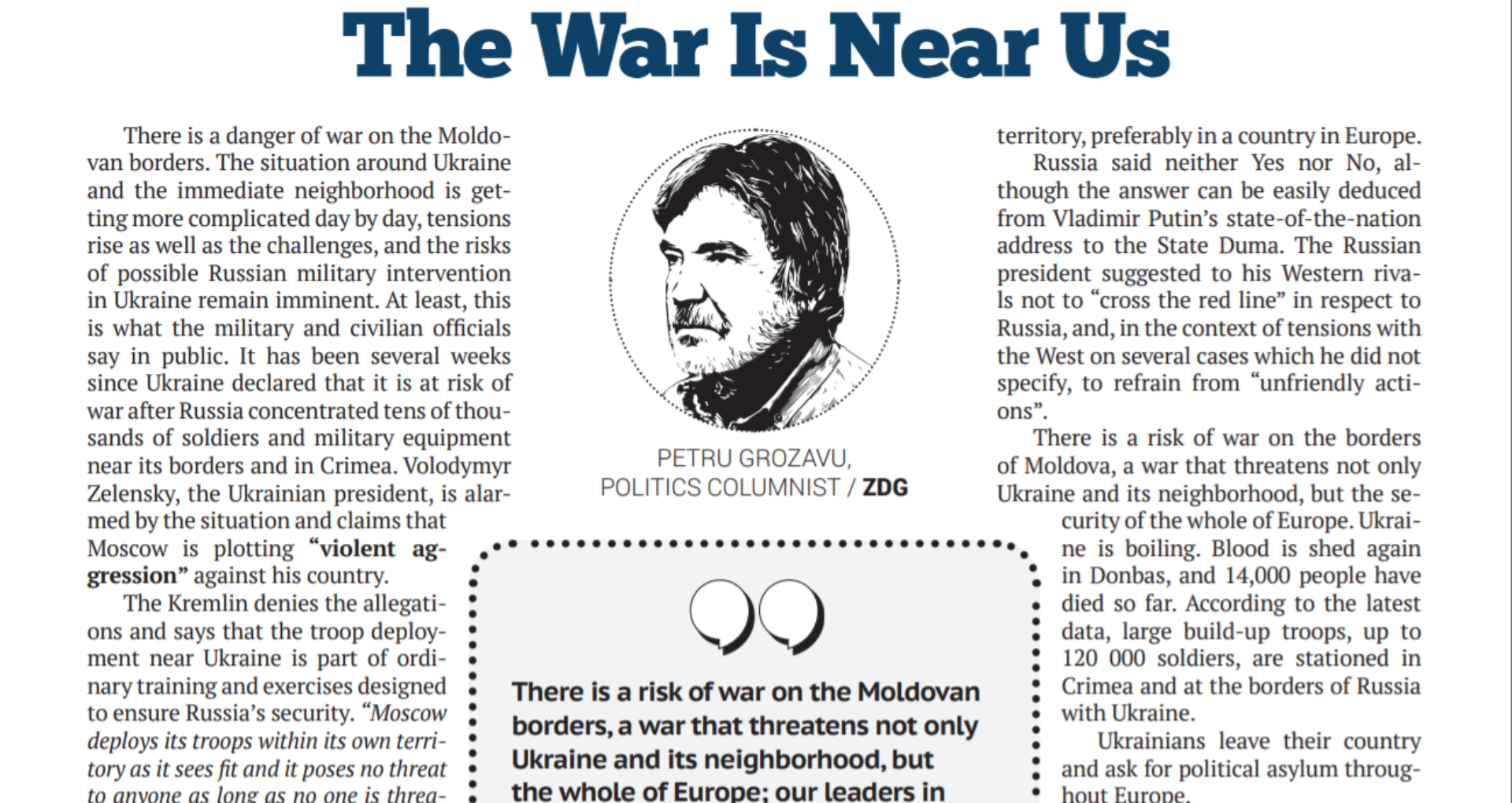 There is a danger of war on the Moldovan borders. The situation around Ukraine and the immediate neighborhood is getting more complicated day by day, tensions rise as well as the challenges, and the risks of possible Russian military intervention in Ukraine remain imminent. At least, this is what the military and civilian officials say in public. It has been several weeks since Ukraine declared that it is at risk of war after Russia concentrated tens of thousands of soldiers and military equipment near its borders and in Crimea. Volodymyr Zelensky, the Ukrainian president, is alarmed by the situation and claims that Moscow is plotting “violent aggression” against his country.

The Kremlin denies the allegations and says that the troop deployment near Ukraine is part of ordinary training and exercises designed to ensure Russia’s security. “Moscow deploys its troops within its own territory as it sees fit and it poses no threat to anyone as long as no one is threatening Russia,” declared the Kremlin spokesman Dmitry Peskov.

Kyiv refuses to believe Moscow’s statements. The Ukrainian Foreign Ministry recalls that in 1994, “Ukraine gave up its nuclear arsenal, which then was the third-largest nuclear power in the world, in exchange for a commitment, including from Russia, not to threaten our territorial integrity and sovereignty. Russia broke the promise in 2014,” Kyiv Foreign Minister Dmitry Kuleba said in a press release. “What makes them not break their promise again in 2021?” he asks rhetorically.

The situation in Ukraine is worsening by the day due to renewed fighting in eastern Ukraine between pro-Russian rebels in the Donbas region, backed by Russia and regular Ukrainian troops. Both Ukraine and the Russian Federation have joined forces on the borders of the self-proclaimed “People’s Republics”  Donetsk and Luhansk, accusing each other of escalating military conflict in recent weeks and violating the Peace Agreement signed in Minsk last summer.  Russian authorities accuse Kyiv of conspiring to escalate a “civil war” against the Russian-speaking population of the two pro-Russian republics, Donetsk and Luhansk, and threaten military intervention to support them, if necessary. “Russia will not remain indifferent to the fate of Russian speakers living in southeastern Ukraine,” said  Dmitry Kozak, deputy head of the Russian presidential administration.

Volodymyr Zelensky, the President of Ukraine, claims that Moscow is deliberately imposing military action in Donbas “to force Kyiv to make a mistake and justify its armed invasion of Ukraine.” One way or another, tensions continue, challenges remain, and uncertainties increase. Kyiv is looking for solutions and international support to avoid a war with Russia, which would be fatal not for Ukraine only. After a series of consultations with US President Joe Biden and NATO ambassadors, President Zelensky is increasingly firm on his country’s membership in NATO and the EU to be protected from the Russian threat. “We cannot stay indeterminately in the waiting room of the EU and NATO. Only joining the North Atlantic Alliance can stop Russia,” writes portal agerpress.ro citing Zelensky’s interview with the French newspaper Le Figaro.

The United States, France, Germany, and the United Kingdom have shown solidarity with Kyiv and called on Moscow to defuse the situation and end destabilizing Ukraine. Turkey, in the person of President Recep Erdogan, has done the same. The US President Joe Biden, against the backdrop of growing tensions around Ukraine, invited Putin to meet on neutral territory, preferably in a country in Europe.

Russia said neither Yes nor No, although the answer can be easily deduced from Vladimir Putin’s state-of-the-nation address to the State Duma. The Russian president suggested to his Western rivals not to “cross the red line” in respect to Russia, and, in the context of tensions with the West on several cases which he did not specify, to refrain from “unfriendly actions”.

There is a risk of war on the borders of Moldova, a war that threatens not only Ukraine and its neighborhood, but the security of the whole of Europe. Ukraine is boiling. Blood is shed again in Donbas, and 14,000 people have died so far. According to the latest data, large build-up troops, up to 120 000 soldiers, are stationed in Crimea and at the borders of Russia with Ukraine.

Ukrainians leave their country and ask for political asylum throughout Europe. Alarming tectonic movements are noticed in Romania and Belarus, and it is clear that everyone is preparing for something, reorganizing, fortifying, and mobilizing. The same goes on in Tiraspol district, southern Moldova. In Chișinău, however, there is peace and quiet. Pavel Filip, deputy and leader of the Democratic Party of Moldova, asks rhetorical questions on Facebook: “Does the country leadership not have time for security issues?”

Three months after the start of the crisis in Ukraine, the Parliamentary Commission on National Security and Defense convened a meeting of representatives of the Ministry of Defense, the Information and Security Service, the Ministry of Internal Affairs, and the Reintegration Bureau. Note that the Supreme Security Council has never been convened in a meeting on this subject, much less the Government. They act as if Ukraine were overseas, as if we had not gone through a war with Russia in 1992, as if we no longer had a Russian army in the breakaway Transnistrian region, and as if this army isn’t there to cuppy but to protect us.

It is difficult to say what will follow. However, if Ukraine, with a population of 40 million falls, Moldova, with its less than 3 million population, will certainly fall too. In a matter of days, through a lightning-fast referendum (as Moscow can organize), the whole of Moldova may become a breakaway Transnistrian region or a Crimea. 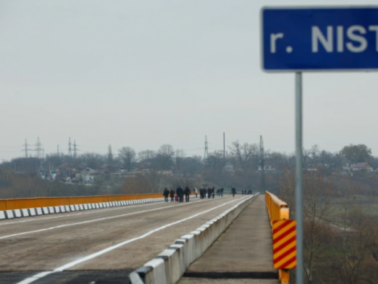 Chișinău Authorities will Send to the Breakaway Transnistrian Region over 5,000 Doses of the Anti-COVID-19 Vaccine 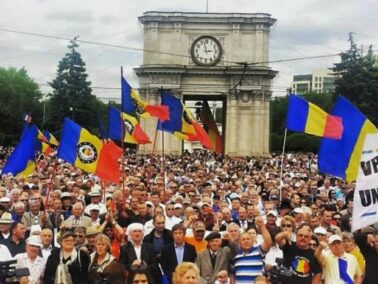 Testimonies of the People that Participated in the Great National Assembly