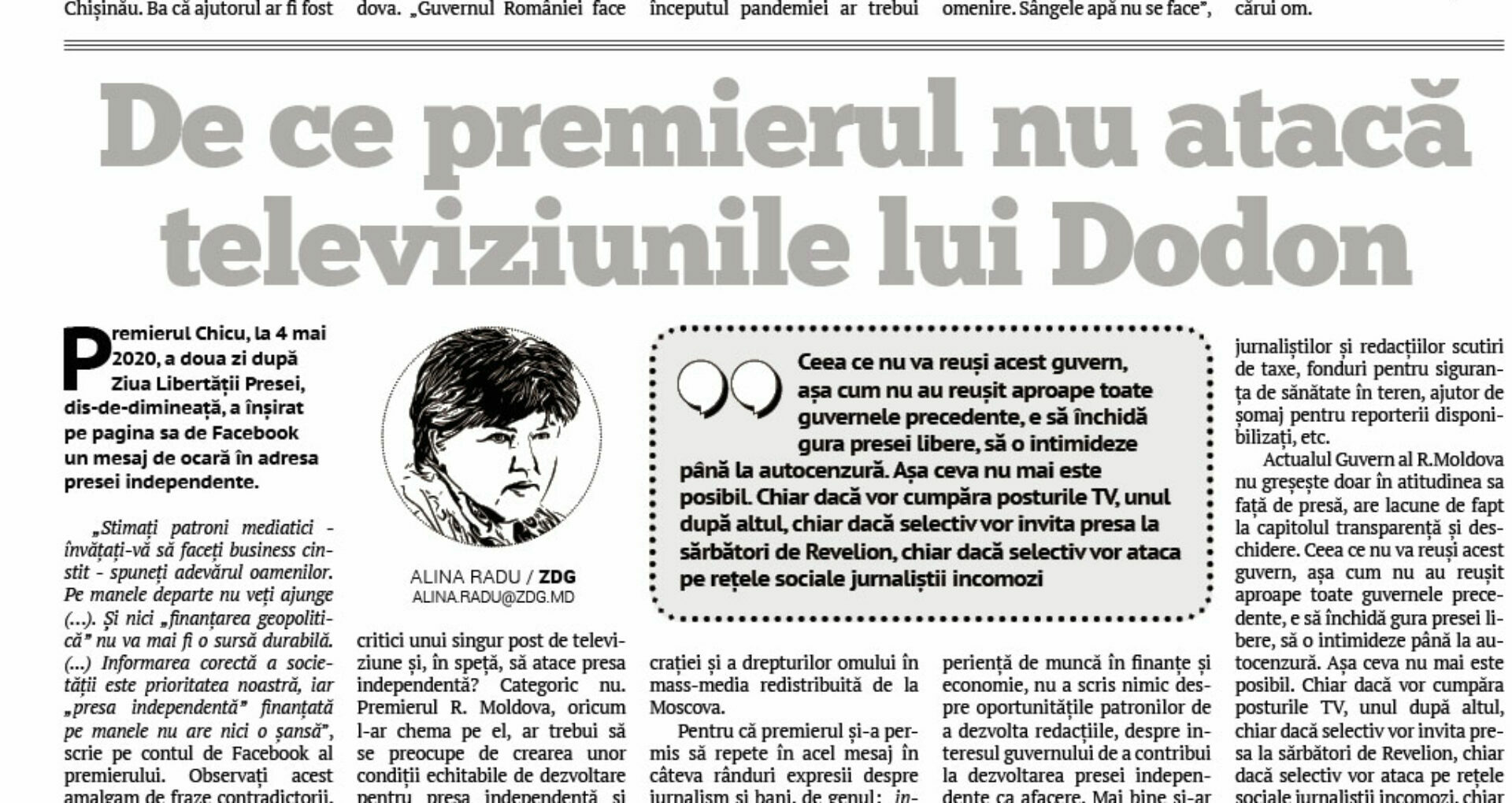 The Moldovan press has been fighting for independence and access to information for 29 years. The guild has accomplished many things in these decades, some of the achievements opposing to the stated goal.  For example, it has succeeded to demonstrate the dexterity of some politicians to take control of the press and concentrate the media in their hands. It has proven how devoid of principles and values some colleagues are.  Moreover, the guild has demonstrated how easily some media workers can be corrupted and how weak the public pressure is as well as how vulnerable professional solidarity is. The press in Moldova is largely controlled politically, journalists from media outlets paid by politicians have served in various politically controlled media for decades, and more and more reporters are lured not to fight for truth and offer the population equidistant information, but to serve a party.

Nevertheless, the independent press does exist in Moldova, and this is a great success of the press itself and a great failure of most of the abusive and obscure governments that have perished since the establishment of Moldova as a state. The pandemic has helped a lot in the development of those who understand and those who do not understand the role of the independent press in a free society, where democracy works.

The Quarantine Locked Down People, but not Information.

In March 2020,  a few countries, including China, were already fighting the COVID-19 for several months already, but we were all taken by surprise. It was the first time that a national quarantine was announced and both the government and the press had to do their job in new, unfamiliar conditions.

In the new circumstances, it was important to observe the way governments and newsrooms in the countries where quarantine had entered into force earlier were operating. We saw that press conferences were held daily and several times per day, as well as virtual communication of governments, ministers, and mayors with reporters.

In all countries that claim to respect their citizens, the press events were attended by different state officials aside from the ministers of health. Several officials explained to people, through journalists, how they contribute to solving problems. In the last week, for example, the Prime Minister  of Australia explained the journalists in a virtual press conference what measures are there for the unemployed or small businesses. Similarly, the Boston City Hall  in the U.S. held a press conference on the grim statistics of traffic accidents during the pandemic, criticizing drivers who abuse the empty streets driving in excess of speed limits. In the United States, the governor of an American state, Brian Kemp, also held a press conference about his concerns on child abuse during-pandemic, pointing out that many cases may go unreported as the children stopped attending school.

What Are Press Conferences about During Pandemic?

The U.N. organizations are an example for the authorities in Chișinău. For instance, apart from the World Health Organization’s press conferences, Antonio Guterres, U.N. Secretary-General, recently held a press conference, calling for solidarity and support for the more vulnerable people.

The European Union (EU) institutions with which Moldova has signed an Association Agreement, committing to improve the situation of the media, are also holding many press conferences. During the pandemic, the Council of the European Union organized numerous press conferences on various aspects of public life such as energy resources, compensations for farmers, transportation, unemployment, domestic violence. This is additional to issues related to the COVID-19 infection. Journalists were free to ask questions at all these virtual events.

Moldova boasts of being among the states with the fastest Internet, and all ministers and other dignitaries have high-performance computers, laptops, and mobile devices. Therefore, virtual press conferences had to be held permanently, on a daily basis. In a stressful situation created by the pandemic, lack of information, unanswered questions and unexplained worries amplify the problems created by viruses. Unfortunately, for two months, the Government didn’t held a single press conference in Moldova. After the journalists who made numerous public and personal requests created a crisis body, the Ministry of Health organized a press conference.

We may admit that there were no conferences because our leaders were too busy. However, they were not too busy to attack the independent press continually.

On May 4, 2020, following World Press Freedom Day, Prime Minister Ion Chicu  accused the independent press (Pro-TV) in a post on his Facebook page.

“Dear media owners – learn to do honest business – tell the truth to people. You will not reach far on ‘manele’pop and folk music (…). Many of you will lose your business if you do not change your attitude and do not deliver information to people. Nor will the so-called geopolitical financing be a sustainable source. (…) We have the priority to inform correctly the society, and the so-called independent press financed on ‘manele’ pop music has no chance,” the Prime Minister wrote.

In the same message, the Prime Minister managed to show his great devotion to the cause of correct and impartial information of citizens, and also to undermine the press that has no political owners.

Is it the Prime Minister’s mission to be particularly critical of a single television station and, in this case, to attack the independent press? Definitely not. The Prime Minister of Moldova, whatever their name, should be engaged in creating a level playing field for the independent press and do everything to discourage the expansion of the party press. Moreover, the Prime Minister should have sounded the alarm about the concentration of a large number of televisions, newspapers and portals  under the auspices of one political power.

Moreover, the Prime Minister should have spoken publicly about the issue of distributing propaganda against democracy and human rights in the media redistributed by Moscow.

“Self-Cleaning” in the Government is Necessary.

The Prime Minister repeatedly used in that message phrases about journalism and money: “media owners do not make enough money on objective information”, “the public was gradually accustomed with talk shows where easy money comes from advertising.”

I hoped that the dignitary would start an honest discussion about the political control over the advertising market and about the difficulties of the investigative press, which does not offer advertising to readers. Ion Chicu, with experience in finance and economics, did not write anything about it. He did not write about employers’ opportunities to develop newsrooms, about the Government’s interest in contributing to the development of the independent press as a business. He just wrote how much he does not like a TV station. This disqualifies Ion Chicu as Prime Minister, but qualifies him well as a subjective press striker.

”We have no time for your self-cleaning,” Vitalie Dragancea, Ion Chicu’s adviser, said to journalists. I hope this subsequent statement was not suggested by the Prime Minister. I also hope they will not make time to “clean up” the press according to their standards. They should start following the standards of quality governments, “self-cleaning” the government.

Since the pandemic and quarantine began, I have been watching other governments’ conduct in relation to the media. While the U.N. calls on the governments  of the world’s states to take into account the difficulties the press faces in pandemics, including not only problems of overwork and risks of infection, but also economic and financial problems, world governments are taking a stand.

The United Kingdom Government declared  a series of special measures to support newspapers, and the U.S. Congress is adapting its work by providing facilities for journalists. Other public authorities around the world have offered journalists and newsrooms tax exemptions, funds for health safety in the field, unemployment benefits for laid-off reporters, and so on.

The current Government of Moldova has gone wrong in its attitude towards the press, breaking the laws of transparency and openness.

This government, as almost all previous governments, failed to shut up the free press, to intimidate it to the point of self-censorship. Such a thing is no longer possible. They may buy TV stations one after the other. They may selectively invite the press to New Year’s Day celebrations. They may selectively attack social networks the inconvenient journalists. They may sue the investigative journalists. They may not hold press conferences not to answer questions. Despite all this, independent journalism and brave and free reporters will always exist. The freedom of the press, for those who tasted it, is much more important than political power, obscure money, and fear, all taken together. 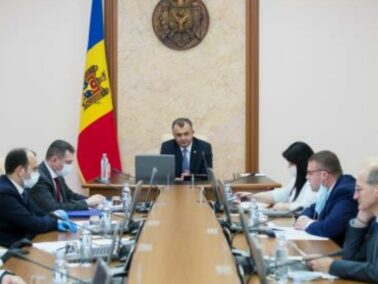 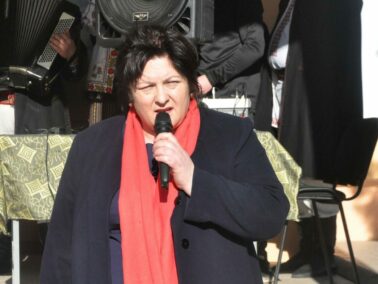 A Mayor Who Concluded Contracts With Family Members Might Get Sacked